GBP/USD bulls defying gravity for a restest of critical resistance

At 1.2498, GBP/USD is higher by some 1.3% on the day and trading close to the highs of 1.2524. The pair has rallied from a low of 1.2334 despite growing risk-off impulses. However, cable remains close to the 2-year low touched last week as soaring inflation combined with a murky growth outlook could cap the gain as bulls challenge the bears at a critical daily resistance again.

Moreover, the Bank of England tightening expectations have stalled as the data have weakened, analysts at Brown Brothers Harriman note.  ''WIRP suggests another 25 bp hike is priced in for the next meeting June 16.  Looking ahead, the swaps market is pricing in 150 bp of total tightening over the next 12 months that would see the policy rate peak near 2.50%, steady from the start of last week.''

Nevertheless, the US dollar has fallen across the board on Thursday, dipping to a 2-week low, extending its pullback from a two-decade high. The greenback has fared poorly against riskier currencies, including the pound. The US dollar index (DXY), which tracks the greenback against six major currencies, was down 1.13% at 102.73, near to the lows of the day and its lowest since May 5 at 102.657. The index hit a near two-decade high last week as a hawkish Federal Reserve and growing worries about the state of the global economy helped lift the greenback to score some 7.5% higher for the year so far.

Fed officials remain hawkish with the chairman's comments during an interview with the Wall Street Journal the most hawkish yet. These were accompanied by Fed's Charles Evans on Wednesday saying that the Fed will likely hike rates above neutral. “If we go 50 bp beyond that, if we go 75 bp beyond that, then that restrictive setting of policy should be working to bring inflation down.” Evans added that “My own assessment of ‘neutral’ is in the 2.25-2.5% range.”

Fed's Patrick Harker also commented yesterday and said “We don’t want to overdo it. But we have to act and we are acting.” He added that the US may have a few quarters of negative growth, but that is not what he is forecasting. Lastly, Harker said the Fed can engineer a “safe” if not “soft” landing for the economy.

As for the bank of England, earlier this week, the Old Lady's Governor Andrew Bailey warned about the apocalyptic risks with respect to food prices. ''Clearly, the Bank has no power to improve supply-side constraints.  Instead, it has a blunt set of tools which can impact demand,'' analysts at Rabobank explained.

''In order to re-set the equilibrium that is conducive to lower price pressures, the Bank is effectively working to rein in economic activity.  As the bank hikes rates to rein in overall demand, the difficulties for many households in coping with higher food and energy costs will be heightened.''

The analysts said, ''Under the weight of USD strength we see risk that GBP/USD could head as low at 1.20 on a 3-month view.'' 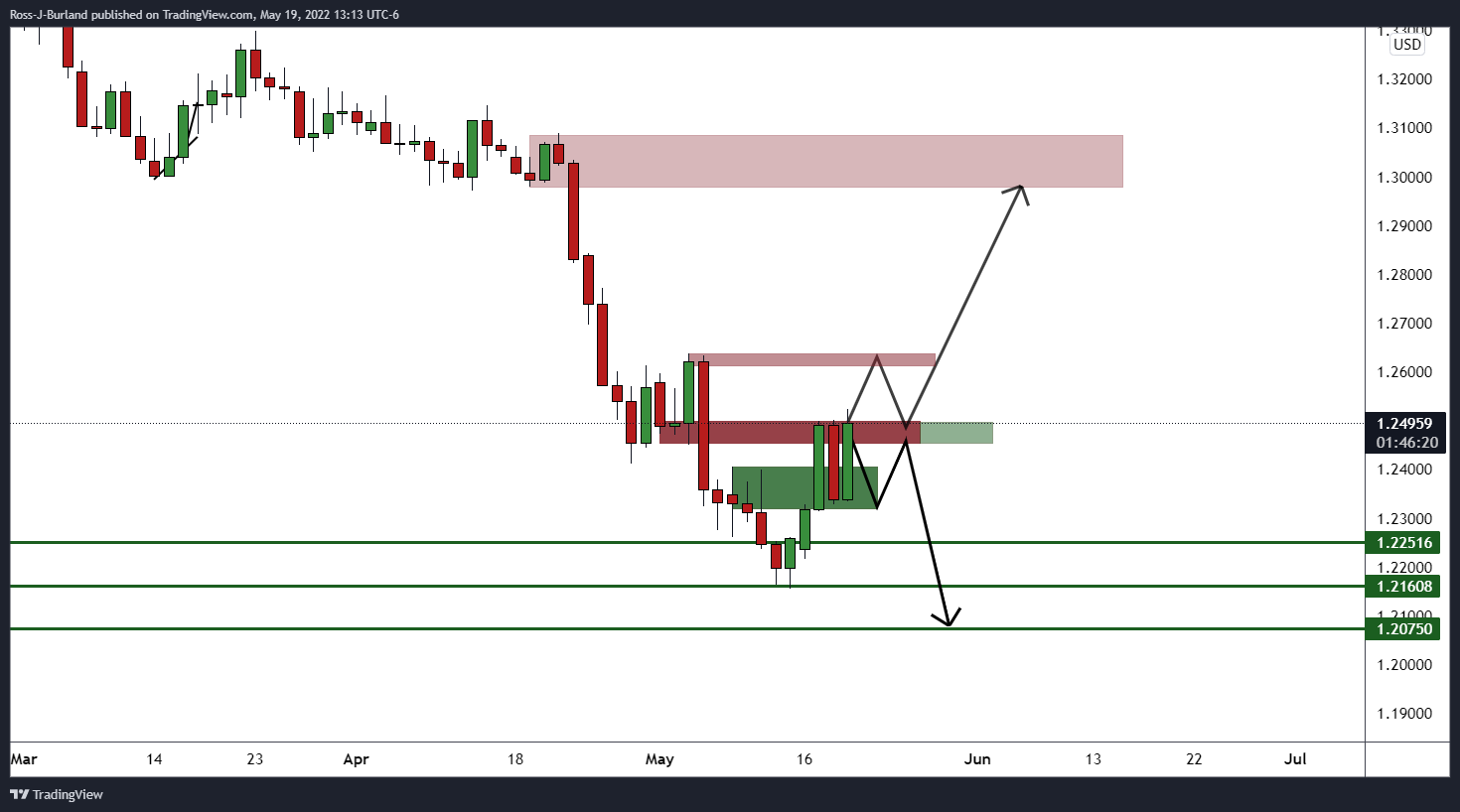 From a daily perspective, the price is testing a resistance area and should the bears commit, then this could lead to a downside continuation on a break of current support. 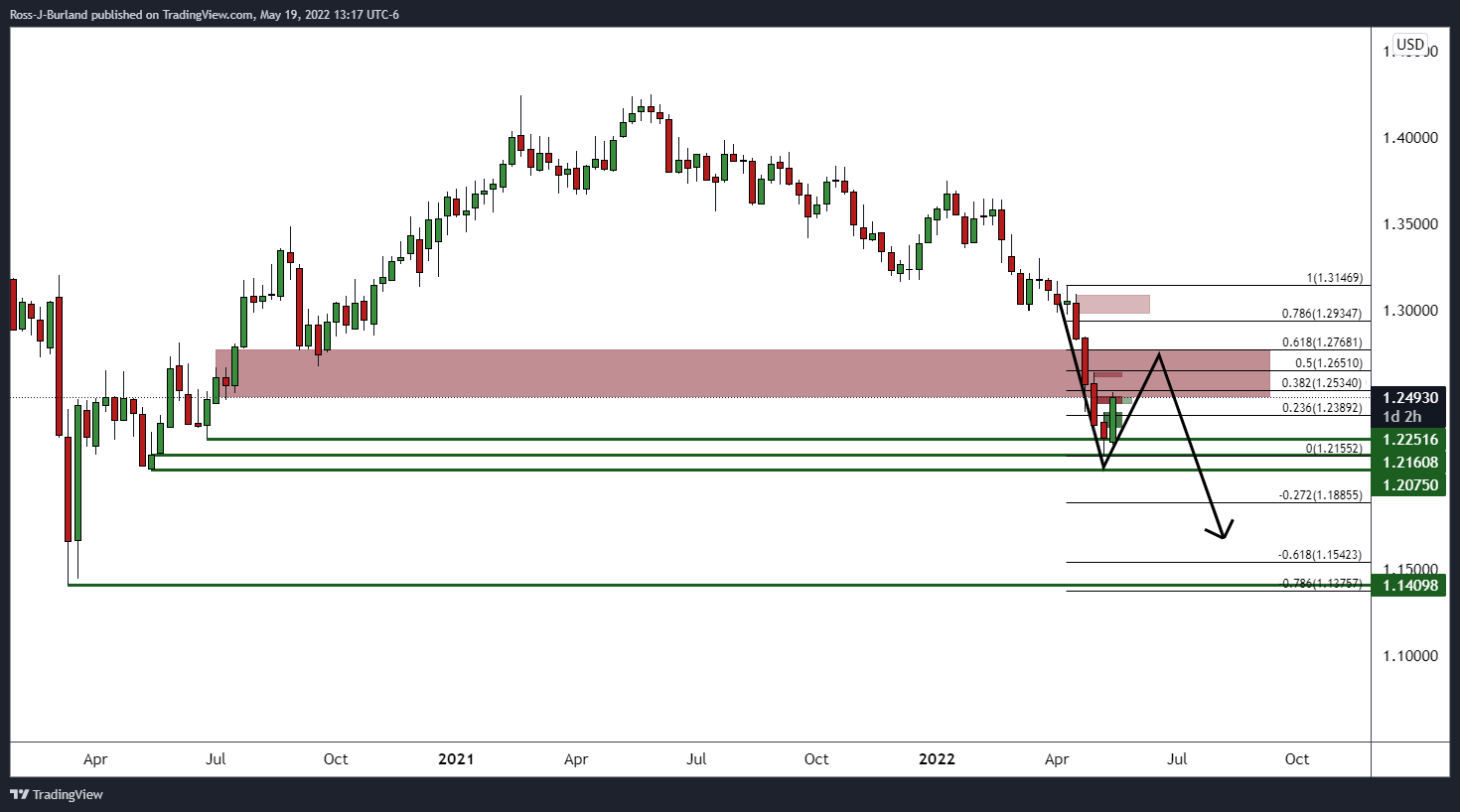 On the weekly outlook, while the price remains contained by resistance, the bias is to the downside. The bulls are currently moving in on the 38.2% Fibo at 1.2534 and just above the highs of the day. However, until the bulls are clear above the 61.8% ratio, they remain in the woods.